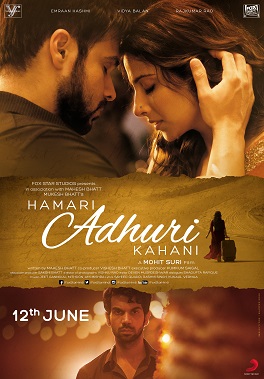 Synopsis: HAMARI ADHURI KAHANI (HAK) narrates the story of florist Vasudha (Vidya Balan) who is the lonely and dejected wife of fugitive, Hari (Rajkummar Rao). One day during a high-profile project, successful hotelier, Aarav Ruparel (Emraan Hashmi) enters her life and shows her the ‘light of love’.

The highlight of HAK is it’s dialogues, which are penned by Shagufta Rafiq. Like some of her previous works, Rafiq impresses with the dialogues in this movie too. This is because they were deep, philosophical and most importantly, romantic. Several lines will either make you cry or compel you to say ‘aww’.

With a cast consisting of versatile actors such as Vidya Balan, Emraan Hashmi and Rajkummar Rao, it is evident that there would be expectations of outstanding performances. However, in this movie, the acting was satisfactory. Why? because the actors have portrayed similar characters before. For instance, Hashmi depicted the traits of an understanding lover in THE DIRTY PICTURE (2011). Similarly, Balan played the role of a heartbroken lady in PAA (2009) and to a certain extent, KAHAANI (2012). As for Rao, he has essayed the role of a quasi-dominating man in QUEEN (2014), and a wrongly accused in SHAHID (2012).

To begin with, the title song and Hasi are two successful/popular songs and my favourite tracks of the year. On the other hand, the rest of the tracks are great to listen, but as soon as the credits roll, they are almost forgotten. In comparison to the music of Mohit Suri’s previous films: EK VILLAIN, and AASHIQUI 2, the soundtrack of HAK is not path-breaking or extraordinary.

What’s bad? Pyaar ka dard hai… Literally! HAK is full of pain with tears as it’s gain! Although the romance quotient is strong, the film is morbid and depressing. Then again, with any Mohit Suri movie you cannot really expect YRF-style romance!

On the whole, HAK is not a boring movie, not is it an excellent venture. But the good thing is that the film maintains the audience’s attention throughout. However if you fancy watching a commercial, light-hearted romantic comedy then HAK is not the one for you!

Bones And All Review: A Love Bite Never Been Bloodier

Romeo Akbar Walter: Suchitra Krishnamoorthi Back on the Big-Screen with Jackie...

Nick Jonas to Return as Alex in Jumanji Sequel