Bajrangi Bhaijaan Movie Review: It’s all about ‘being human’! 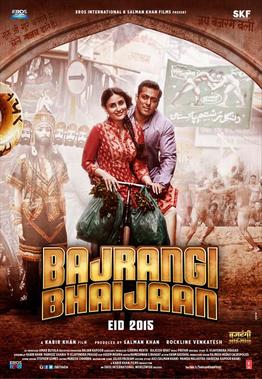 Synopsis: After Pawan Kumar Chaturvedi aka Bajrangi (Salman Khan) discovers that a 6-year old Pakistani girl, Shahida (Harshaali Malhotra) has been left behind in India, he decides to drop her back home… By hook or by crook.

We have seen many films that have depicted the Indo-Pak relationship, but they have mainly portrayed the conflict and the differences in religion. However, BAJRANGI BHAIJAAN (BB) narrates a light-hearted, optimistic story of friendship and an appreciation of both cultures. If we look at last year’s PK, which (in a way) challenged religious dogmas and superstitions, BB is the complete opposite. This is because the movie does not focus on religious differences, but conveys that we- as human beings should respect and support each other, with a well-intentioned heart. Kudos to the writer K.V. Vijayendra Prasad for a novel concept!

2. The performances… Nawazuddin packs a punch!

The performances are the biggest highlight of the movie!

Firstly, enacts the role of a Hanuman devotee well. His performance as a simpleton was sincere, and you could tell from his facial expressions. His eyes conveyed it all. One of Mr. Khan’s best performances in recent times for sure! Secondly, Harshaali Malhotra is a superstar in the making. Her performance as a girl who is unable to speak was brilliant. Her presence made you go ‘aww’ each time. In fact, watching Salman and Harshaali’s bonding makes you realise how a well-intentioned heart to help someone can omit any barrier. Thirdly, Nawazuddin Siddiqui as Pakistani reporter Chand Nawab was phenomenal. His performance was realistic and genuine. Watching his character makes you realise that humanity still exists somewhere in this world. Kareena Kapoor Khan as Salman’s love interest Rasika was satisfactory. Her role was prominent in the first half. However, during the second-half one tended to forget about her as we are thoroughly captivated by Salman-Harshaali-Nawazuddin’s adventure.

A special mention here to Meher Vij, who depicted the role of Harshaali’s on-screen mother, effortlessly… She was great.

What’s bad? Although the film’s story is well-intentioned and had several heart-touching moments, the story can be critiqued of being larger than life, while some parts were filmy and clichéd.

Also, the movie’s duration is 159 minutes. Despite the fact that the audience does not get bored, I wish it was slightly shorter!

On the whole, BAJRANGI BHAIJAAN is a well-intentioned, heart-touching movie. The film will compel you to celebrate humanity. Despite it’s length and larger than life elements, it will make you laugh and cry simultaneously. A movie not to be missed!