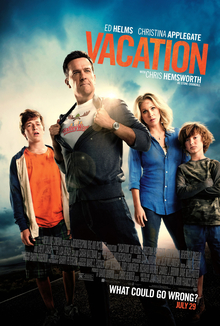 What’s good? 1. Some LOLable moments: From the promos and trailers, VACATION promised to be a hilarious movie, similar to the other instalment and other family-holiday films like GROWN UPS. Luckily, there were several scenes which genuinely made you laugh. For instance, the beginning sequence in the plane turbulence cracked me up… I’m sure it would crack you up too. Also the things which go wrong during this ‘vacation’ are funny to watch.

In my opinion, the humour in a comedy usually comes from the performances. Luckily, the performances in VACATION were decent. Ed Helms as Rusty Griswold- the unexciting father was good. If you thought his nincompoop characteristics in THE HANGOVER series was crazy, then in this film he is worse!

Cristina Applegate as Debbie, the frustrated and bored wife was good. Her performance reminds one Carla Gugino’s character in SPY KIDS. Skyler Gisondo portrays the role of timid and anxious teenager, James, who gets bullied by his younger brother. His shyness and oblivious character makes you go ‘aww’ and of course makes you laugh. Steele Stebbins as the younger brother aka the bully, Kevin, is equally decent. Now how can one forget THOR? The man with the silver hammer… Yeah, well not quite the story for Chris Hemsworth as Stone Crandall in this movie! Here, he plays a rich farmer, and an attractive one too! Leslie Mann (as Rusty’s sister and Stone’s wife) was good.

What’s bad? There were a few weird random characters which were not funny. For example, there was a suicidal river rafting guide, Chad. Even though he was supposed to be strange, I did not find him to be funny at all. Furthermore I felt that the screenplay was dull in many places, and made the film seem more longer than it actually is.

On the whole, with a movie like VACATION, the concept of logic flies out of the window. Indeed it has its quotients of humour and slight entertainment, but as an overall movie its quite dull. If you have a Cineworld Unlimited card, I would say give it a watch. However if you are to pay a tenner for the ticket, I would say leave it. So now? The ball is in your court!